Other Cinemas are pleased to announce our ‘Radical Films, Radical Forms’ weekender taking place on the 25th – 27th of March, which has been co-curated with filmmaker Saeed Taji Farouky

Militant Arab documentary cinema was born in the Palestinian refugee camps of Lebanon and the classrooms of the London Film School. The filmmakers of the Palestine Film Unit armed themselves with cameras, their logo an AK-47 with a film canister on the gun barrel. Their films weren’t merely records of events, but live ammunition in the struggle for liberation.

Bullets fly from the barrel of a gun, from the inside out. Images flow into the barrel of the lens from the outside in. These directors weren’t passive observers, but active creators of their own revolutionary representation.

“… and for those who suffer from invisibility, the camera would be their weapon,”– Elias Sanbar, Palestinian historian, diplomat, poet.

They are trade union activists in Lebanon’s Civil War (Mary Jirmanus Saba’s A Feeling Greater Than Love). Young female fighters in the war for the liberation of Dhofar, Oman (Heiny Srour’s The Hour of Liberation Has Arrived). Collectivised labourers in Cairo’s working class districts (Jasmina Metwaly & Philip Rizk’s Out on the Street). Female victims of Assad’s prisons (Hala Alabdalla and Ammar el-Beik’s I Am The One Who Brings Flowers to Her Grave). Palestinians formerly detained in an Israeli prison (Ghost Hunting, from Raed Andoni) The invisible ones. In these films, the directors project them on our screens with affection, sensitivity, and respect. Dedicating time to the careful observation of someone is an act of love, a reflection of Che Guevara’s self-conscious statement: “At the risk of seeming ridiculous, let me say that the true revolutionary is guided by a great feeling of love.”

These filmmakers tell stories to declare their self-determination. It’s a revolutionary act, but one achieved through the simple manipulation of light and shadow. It’s a magic trick. (No wonder the first filmmakers were illusionists). We gather in dark cinemas, together, to collectively experience this illusion. To witness, journey, wonder, to see ourselves on that screen. When the film is over, the screen goes dark. But the light remains.

Book tickets for the ‘Radical Films, Radical Forms’ programme here or by clicking on the links below.

Music and poetry have long traditions as expressions of self-determination and resistance in the Arab World. For our opening night celebration, please join us to enjoy music from the Arab World with a deep commitment to both innovative artistry and the politics of liberation.

1:30pm – Screening of Out On The Street by Jasmina Metwaly and Philip Rizk

3:15pm – Philip Rizk, the director will be joining us in person for a Q&A exploring the themes of the film

Over the past decade, a technique has emerged in Arab documentaries that offers a radical and sensitive way to represent, examine, and heal personal trauma. Inspired by creative activists like Augusto Boal and Paolo Friere, this technique combines theatre, re-creation, and collective action in films like Scheherazade’s Diary  (dir. Zeina Daccache, 2013), Ghost Hunting (dir. Raed Andoni, 2017), and Out on the Street (dir. Jasmina Metwaly & Philip Rizk, 2015). Join Philip Rizk for a practical workshop on how to integrate this approach into your own projects. (sign-up required)

This discussion welcomes three filmmakers, Naziha Arebi, Arij Al-Soltan and Ken Fero, whose work deals directly with trauma – both personal and political. They will discuss how to approach it with care and sensitivity, and will share their strategies for representing, interpreting, and transforming trauma through cinema.

New approaches to cinema also require new ways of making and distributing films. In this workshop,  Philip from the Mosireen Collective and Naziha Arebi from Rawiyat and HuNa a film production collective focused on storytelling in Libya, will discuss the transformative power of collaborative work, and will share strategies for supporting collectives and creating alternative networks of film production and exhibition outside the commercial mainstream.

12:30pm –  Screening of A Feeling Greater Than Love by Mary Jirmanus Saba

Several films in our programme deal with the collective power of labour unions, and the potential of direct action. In this workshop, Huda Ammori from Palestine Action and Marissa Begonia from The Voice of Domestic Workers will share their tactics for successful actions, and discuss how cinema can be a crucial weapon in political resistance.

5:45pm – Screening of The Hour of Liberation Has Arrived by Heiny Srour

7pm – Panel on the past and future of militant cinema

Join Mario Abou Hamad, a filmmaker who teaches militant and activist film movements from around the world and militant activist Jehan Helou, to discuss the history of militant Arab cinema and to debate whether there is still space in the film world for militancy and radical documentary.
Get tickets for 'Radical Films, Radical Forms' 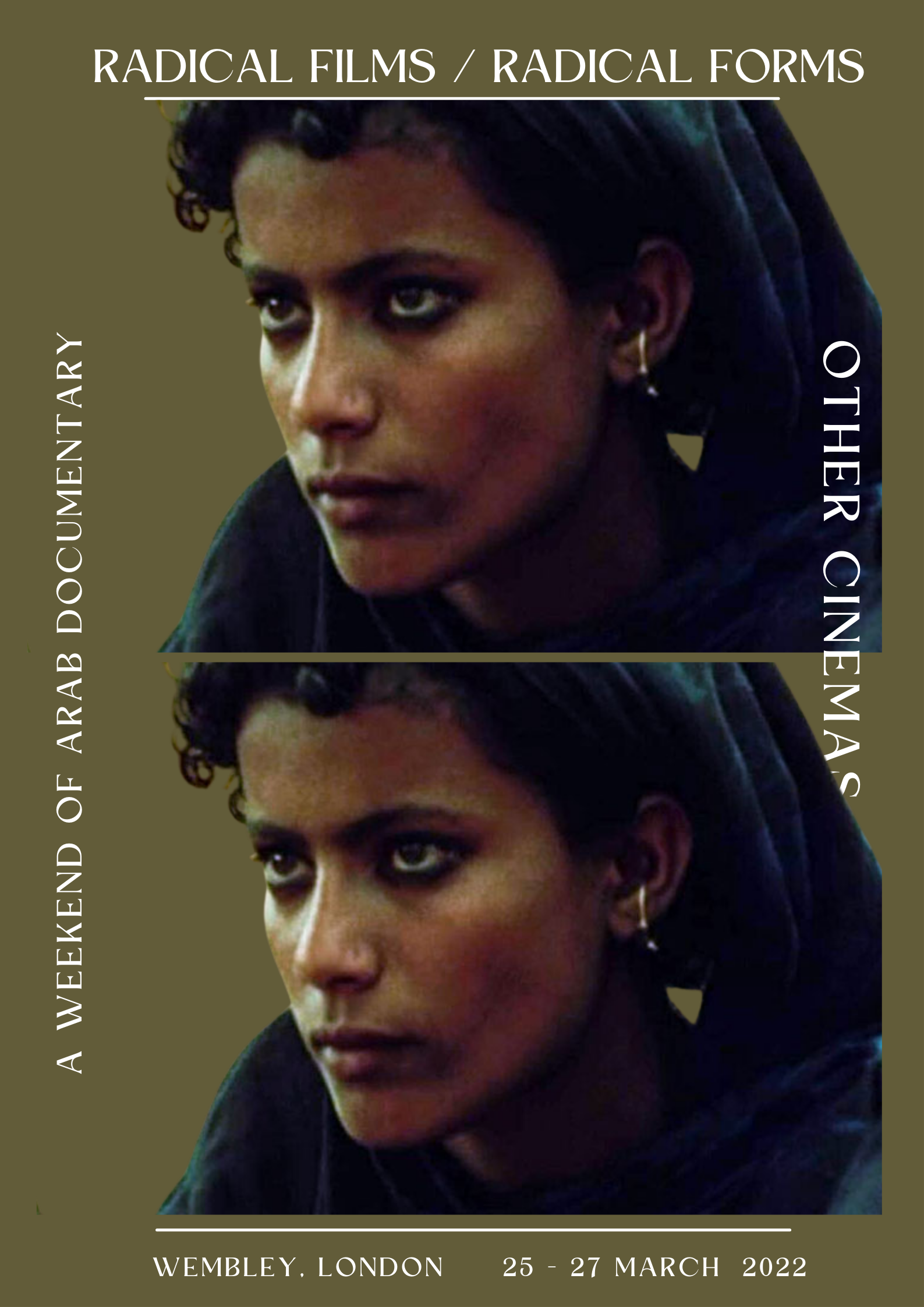 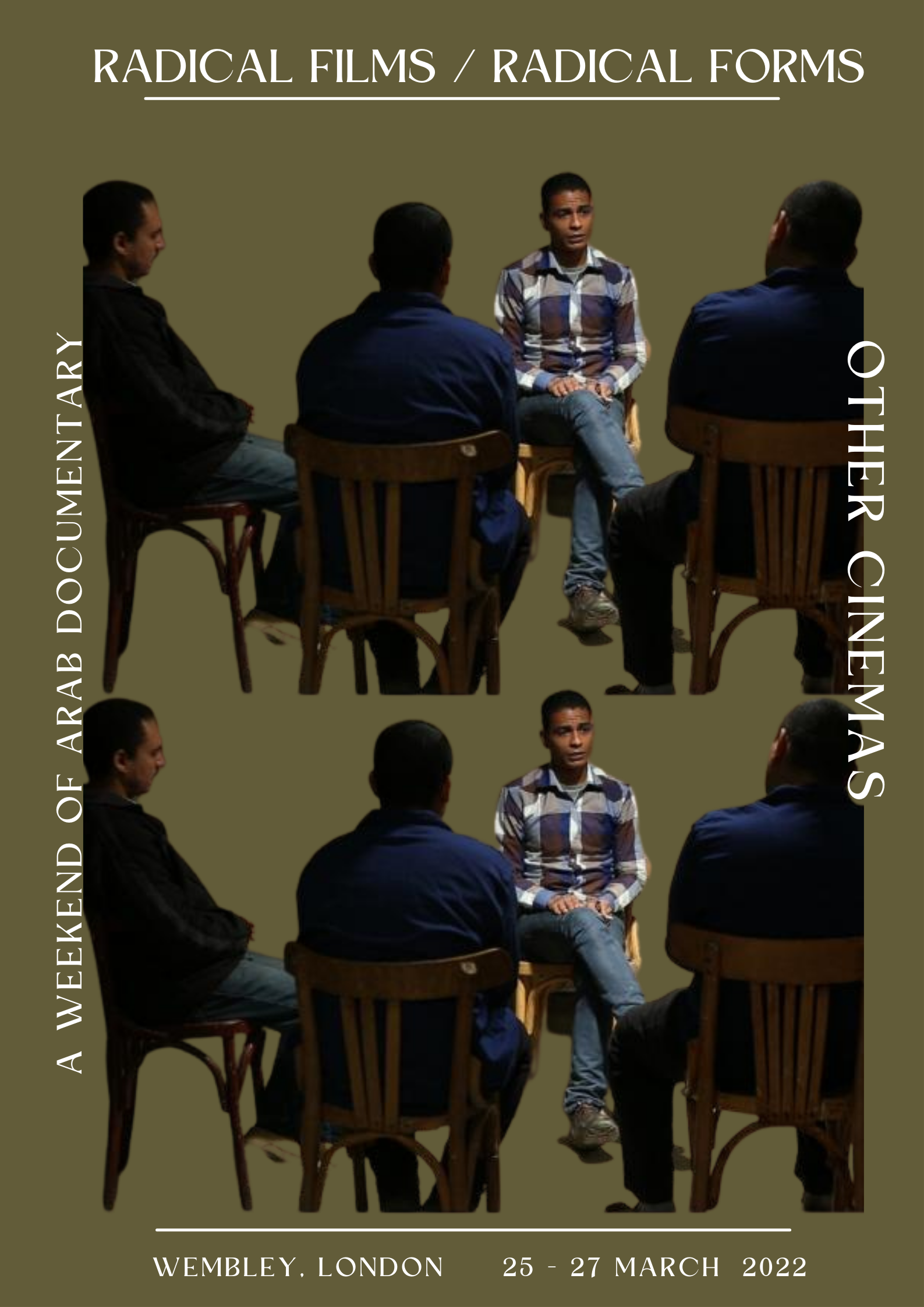 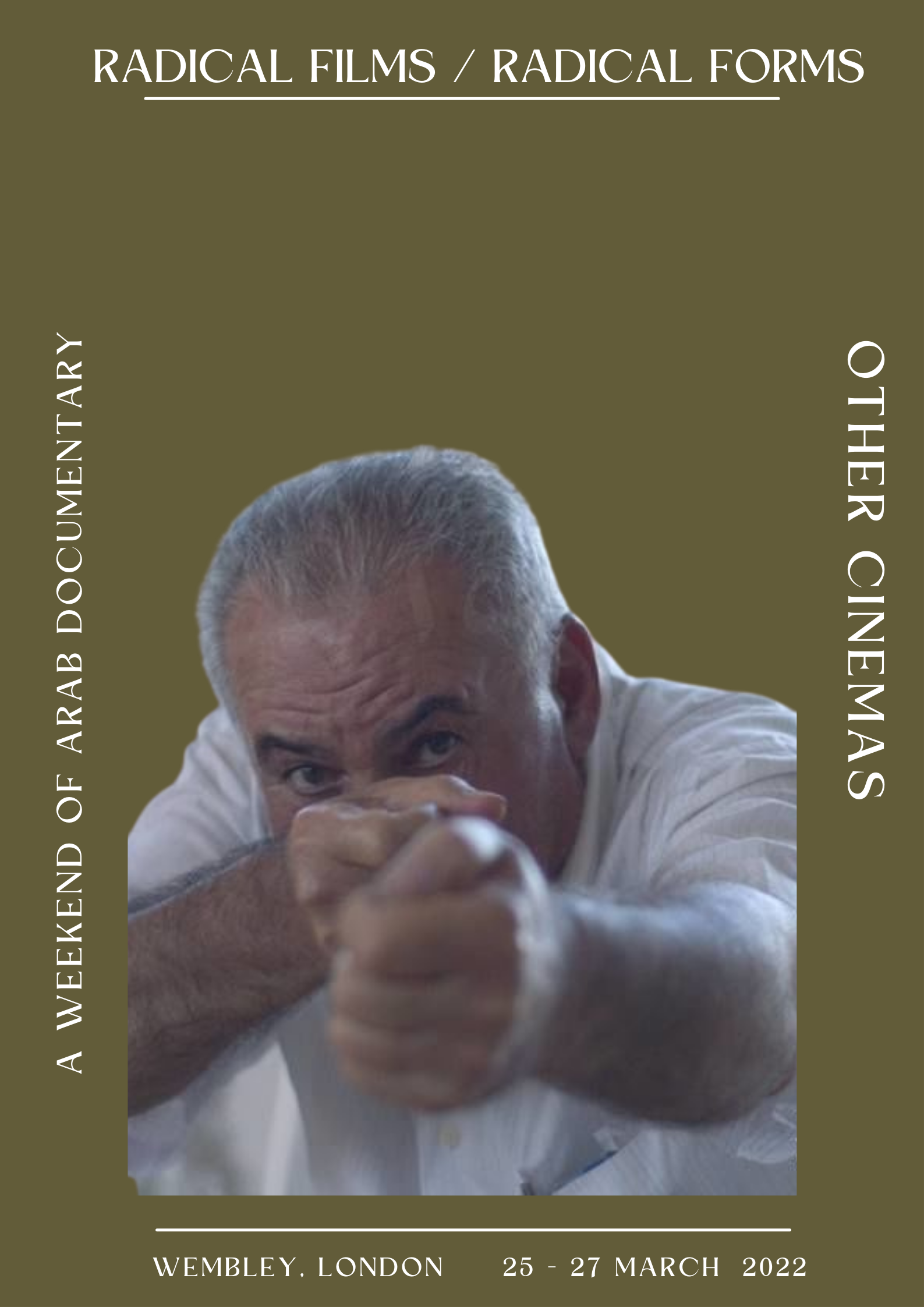 This film is a cinematographic cross between the documentary, the narrative, and the experimental, in which Syrian director Hala Alabdalla blurs the boundaries between genres and time. She combines the present with the past, and merges private and public concerns. Using converging and intertwining storylines, she narrates her friends’ experiences of prison, their disappointments, stubbornness, holding on to the light in their hearts. Shot in black and white, the film aims to portray all colours of life with its sweetness and bitterness.

Nine men gather for a workshop on a rooftop. There they perform confrontations of everyday life, with the police and at the workplace.

In the process, the actors engage a space between the theatrical and the real.

This is not a film about workers.

The factory is a microcosm, a miniature Egypt.

In order to confront the ghosts that haunt him, Palestinian director Raed Andoni assembles an eclectic group of ex-prisoners to recreate the Al-Moskobiya, Israel’s main interrogation centre, where he was himself jailed at age 18. Day after day, these construction workers, a blacksmith, an architect, an assistant director give shape to their memories of how they survived with grit and a sense of humor. As the walls of the cells rise, the tongues and the emotions loosen.

A Feeling Greater Than Love – a film by Mary Jirmanus Saba

In her directorial debut, Mary Jirmanus Saba deals with a forgotten revolution, saving from oblivion bloodily suppressed strikes at Lebanese tobacco and chocolate factories. These events from the 1970s, which held the promise of a popular revolution and, with it, of women’s emancipation were erased from collective memory by the country’s civil wars. Rich in archival footage from Lebanons militant cinema tradition, the film reconstructs the spirit of that revolt, asking of the past how we might transform the present.

The Hour of Liberation Has Arrived – a film by Heiny Srour

In the late 60s, Dhofar rose up against the British-backed Sultanate of Oman, in a democratic, feminist guerrilla movement. Director Heiny Srour and her team crossed 500 miles of desert and mountains by foot, under bombardment by the British Royal Air Force, to reach the conflict zone and capture this rare record of a now mostly-forgotten war.

Accessibility: The venue has step-free access and there is a lift, for those who might need it, to access to the main space. There is a disabled toilet. The chairs aren’t cushioned, they have a backrest but no arms rest but we are able to provide cushions. Cushioned chairs with armrests and backrests can be requested. There will be no BSL interpreter unfortunately. All the films are in Arabic and will therefore be subtitled in English.

Support: These events are supported by Brent Council and The Doc Society.