A weekend of free events and screenings centring the ‘other’ and asking if (an)other cinema is possible. This took place July 2020.

Other Cinema presents a weekender of film and discussion exploring a cinema centring the ‘other’ – the outsiders, the overlooked, the forgotten and the ignored.

The events ask: What does a cinema that centres non-white stories, and Black and non-white filmmakers look like? How do we create it? Are we closer to that goal today or does the past show progress isn’t a straight road and that the struggle for (an)other kind of cinema continues today?

Links to individual screenings below. 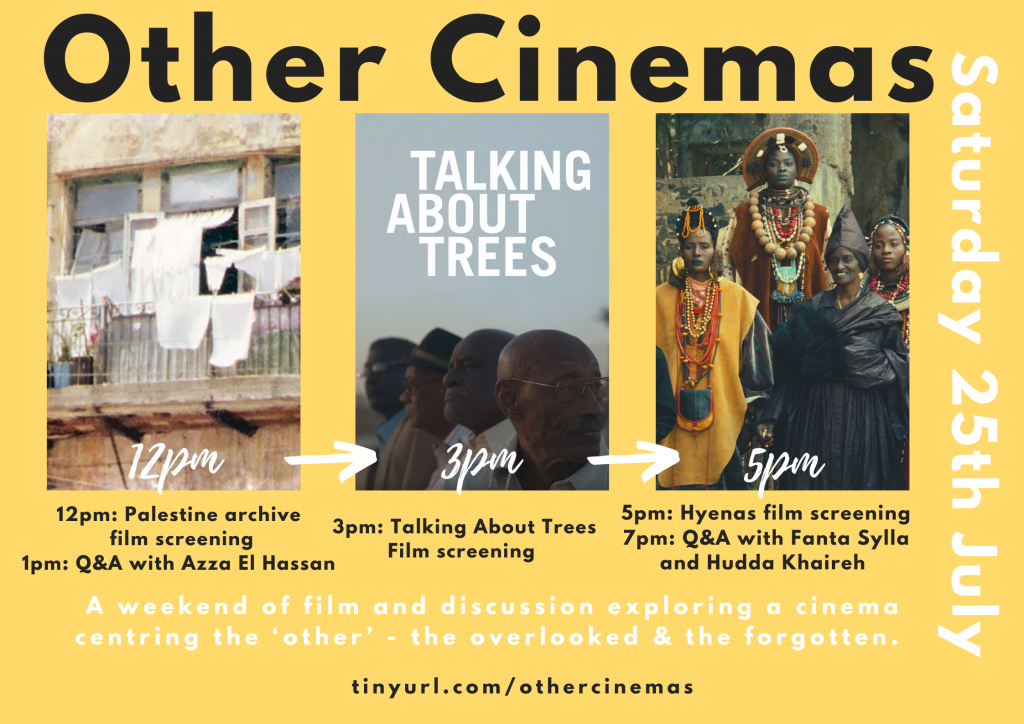 On day one, we look back at the role of film archives in showcasing and capturing the often overlooked works of black and non-white filmmakers and the stories they told which challenged the mainstream narrative. From showcasing restored Palestinian films to the critically acclaimed and recently restored ‘Hyenas’ by legendary Senegalese filmmaker Djibril Diop Mambéty, we want to cast light on the work of the filmmakers that came before us.

To kickstart the day, we will be showcasing two restored films from the often misunderstood and misrepresented nation of Palestine and the roles that Palestinians played in challenging those narratives through film. We screen two films which show how Palestinians embraced the power of cinema to speak out for themselves. Speaking about these films and her work to restore them is the Palestinian filmmaker Azza El Hassan of The Void Project. For full details and to sign up for just this event, see here: https://archivingpalestine.eventbrite.co.uk

‘Talking About Trees’ by Suhaib Gasmelbari captures the fate of a generation of filmmakers in Sudan, their efforts to revive a culture of cinema as well as bringing attention to Sudanese film history. The documentary was made by a young Sudanese filmmaker which we think is important in, again, showcasing the importance of rooting ourselves in our own history of film and amongst our own filmmakers.

We end day one with a screening of the critically acclaimed film ‘Hyenas’ by Senegalese filmmaker Djibril Diop Mambéty. Part of a tryptic, which wasn’t completed due to the filmmaker’s death, Hyenas is a stunning exploration of death, colonialism and corruption. Newly digitally remastered, we are incredibly excited to be sharing this film with you.

We will be hosting a discussion and a Q&A following the screening with Hudda Kharieh and Fanta Sylla. This discussion will be a Facebook Live. 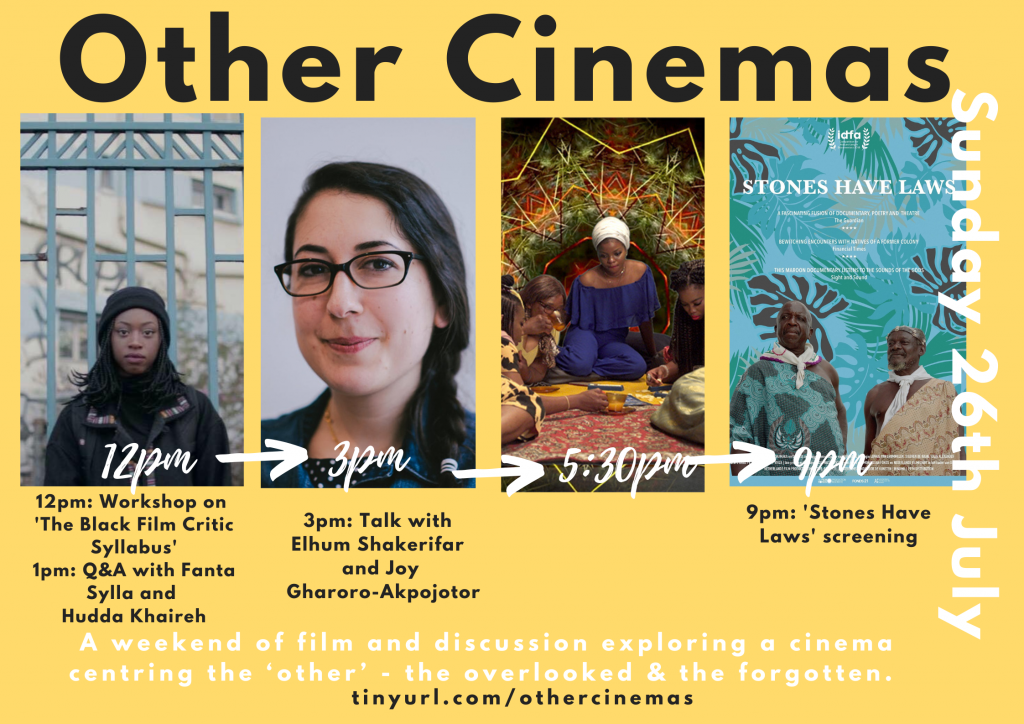 On day two, we look ahead to the future of film and what we can do to help rebalance the power, be disruptive, regroup and find new ways to tell our stories.

We start the day with a workshop by film critic Fanta Sylla, exploring her ‘Black Film Critic Syllabus’ and ways we can all learn to engage more critically with film, especially when it comes to the representation of Black communities. This workshop will be followed by an informal discussion and Q&A led by Hudda Kharieh which will begin at 1pm approx. For full details and to sign up for just this event, see here: https://theblackfilmcritic.eventbrite.co.uk

We then have a talk to explore what producers can do to help create a more inclusive cinema? We speak to the award-winning producers Elhum and Joy Gharoro-Akpojotor, who produced ‘Blue Story’ about supporting filmmakers who tell unconventional stories as well as agency, inclusivity and the craft of producing. For full details and to sign up for just this event, see here: https://elhumshakerifar.eventbrite.co.uk

5.30pm – Everything Worthwhile is Done with Other People: Amal Khalaf and Rehana Zaman in conversation

‘Everything Worthwhile is Done with Other People’ is an in conversation event with Amal Khalaf and Rehana Zaman. The event takes its cue from a quote by organiser and prison abolitionist Mariame Kaba, in an interview of the same name in Adi Magazine. This interview will sit alongside the conversation as Amal and Rehana discuss their three year collaboration with a group of Black and POC women affected by the criminal justice system and their attempts to collectively produce a film that speaks to this process. Reflections, methods and dreams, filtered from their individual and shared work will be offered through the discussion.

Hannan Majid of documentary production company Rainbow Collective and John Pandit of Asian Dub Foundation will speak about their work together on participatory projects in film & music. Combined, they have more than two decades of experience in doing participatory projects in the UK, Bangladesh, Jamaica and South Africa. For full details and to sign up for just this event, see here: https://rainbowcollective.eventbrite.co.uk

In keeping with our theme of exploring a different kind of cinema we will be screening Stones Have Laws, a documentary from 2018. The film is experimental both in its narrative and how it was produced. The film is a collaboration between two Dutch filmmakers, Lonnie van Brummelen and Siebren de Haan and Surnaimese filmmaker Tolin Erwin Alexander. This collaboration extended to the maroon community featured in the film, who together with the filmmakers collectively scripted what would make the final edit. What isn’t said is just as important as what is.

For more details on the screenings and talks happening on the weekend, see here: tinyurl.com/othercinemas 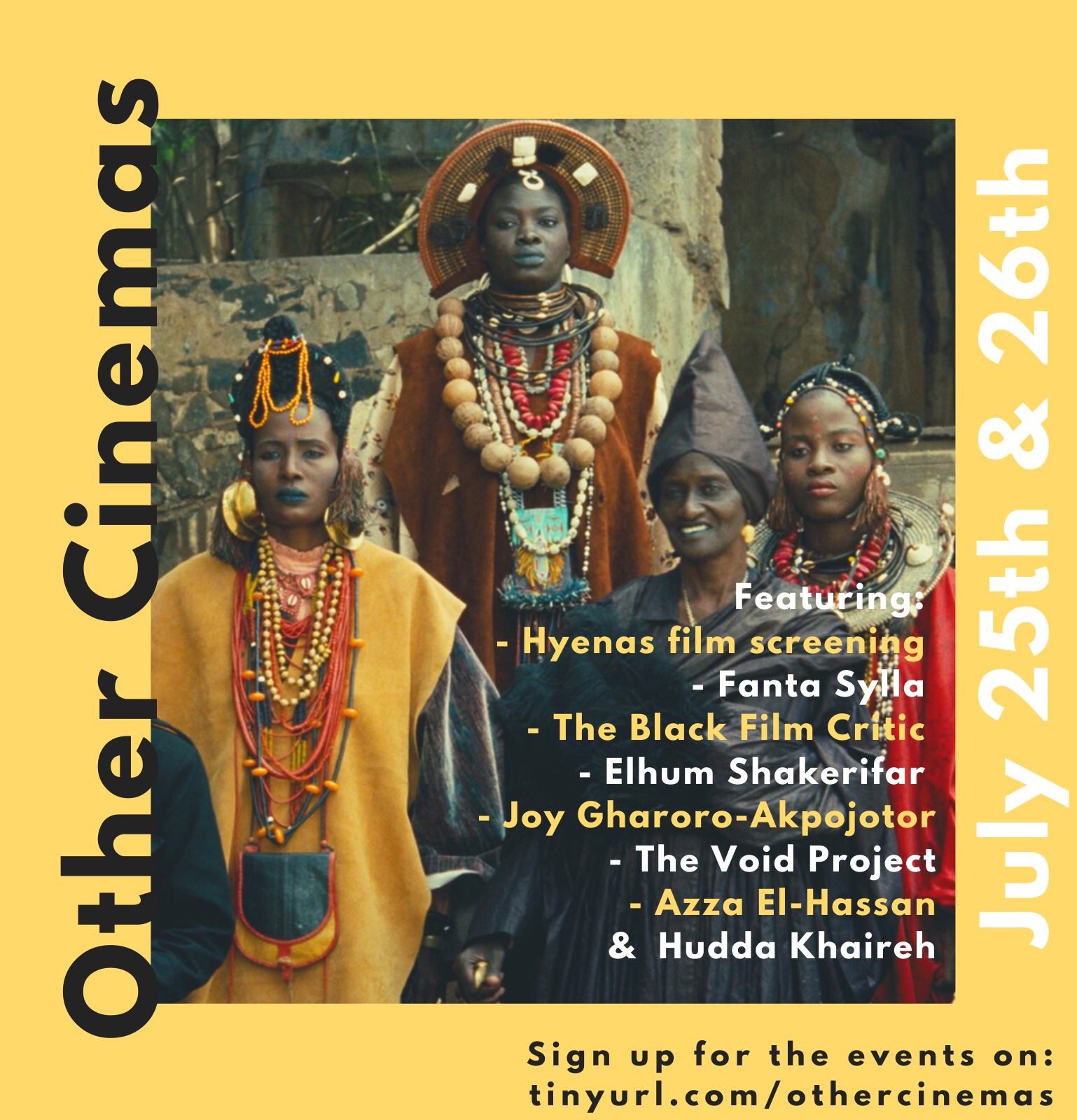